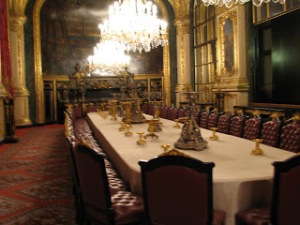 How’d you like to make dinner for the people at THAT table, hmmmm? It seats, like, thirty per side I think. It’s actually in the “Emperor’s Rooms” in the Louvre, which I highly recommend, even though it’s about seventy-five miles from the Mona Lisa. Seriously, you should go see it. These people lived LARGE.

I wouldn’t want to cook for them though. Have you ever heard of the famous French chef Flauvel? He was a cook in the 1700’s (assuming I am remembering this story correctly) and when the fish he ordered arrived late for a banquet he was so distraught he stabbed himself in the stomach and died. I don’t ever want to take my cooking that seriously.

I do love to cook, though. I am a very process-oriented cook; I love the stirring and the mixing and the chopping as much as I like the eating, which is saying quite a bit. I own a food processor, but it languishes under the counter while I dice onions contentedly by hand. It’s almost a meditative act – if one can meditate while messing up the kitchen and weeping from onion fumes.

This is not to say that all of my kitchen experimentation goes swimmingly. I read a lot of food blogs – A LOT – and I love when people talk about how they just grabbed a bit of this and a bit of that and next thing you know they have dinner from the Cordon Bleu. That never happens to me. When I decide to experiment in the kitchen – even if I am making something I’ve made before – the timeline usually goes something like this:

– decide to make, oh, chicken with raspberry sauce over pasta, something I have made approximately ten thousand times.

– cheat completely by buying one of those rottisserie chickens from the Publix. Seriously, are those things the best invention since sliced bread or what? If I had to pick the greatest invention of all time, and was given the choice between Publix Rotisserie chicken, and Dr. Salk and his pesky vaccines, I know which way I’m leaning. You can’t eat a vaccine.

– decide to have bread and cheese for appetizer, since even a poodle could put that together

– realize the cheese I plan to use has mold growing on one edge.

– open some wine. alcohol content will protect us against dodgy cheese, surely

– usually I make the raspberry sauce (equal parts rasperry jam, mustard, and butter, if you must know) in the microwave, but tonight I think I will make it on the stovetop, just for kicks. I don’t know why I don’t make it that way all the time, really.

– decide to grill veggies to go with chicken. Shoot, that means I have to light the grill.

– grill filled with ash. Wet ash, since it’s rained since we last used it and we left the vents open. Ugh.

– sauce is simmering away merrily on the stove. In fact, it’s spattering all over the stovetop. THAT’s why I always make it in the microwave. Ugh.

– slosh the marinade for the veggies on the counter

– get veggies on grill, come back inside just in time to prevent sauce from burning. Whew!

– set table with appetizer. Realize my boyfriend has been eating the bread while we cook and now there is only cheese.

– eeww, they are all soft now

– plate chicken, drizzle artistically with sauce. Sit down to eat. Why yes, I will have more wine, thank you….